Mobile Application has taken a huge leap in this current 5-year time as compared to the last. Especially from Feb 2016, since Google has launched its full fledge AMP update out to the world. After this launch, every company, industry, startup, etc. are on its way to developing a mobile version for their websites. This race does not end only at Accelerated Mobile Pages, it continues to owe a unique and brand-specific Mobile Application. So now we are crystal clear of the way to need to go on. Now enters the hurdles which are on this path, that is finding the best mobile application development company, which meets the expectations.

Here are few points which you should consider while hunting for the mobile app companies.

These are a few of the checklist points to be considered while choosing the Mobile Application development company for your own product or services. CodePlateau Technology is one of the mobile app development company which satisfies all the criteria’s mentioned above. For the best in class and standard mobile app get in touch today. 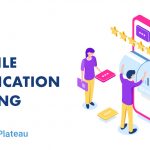